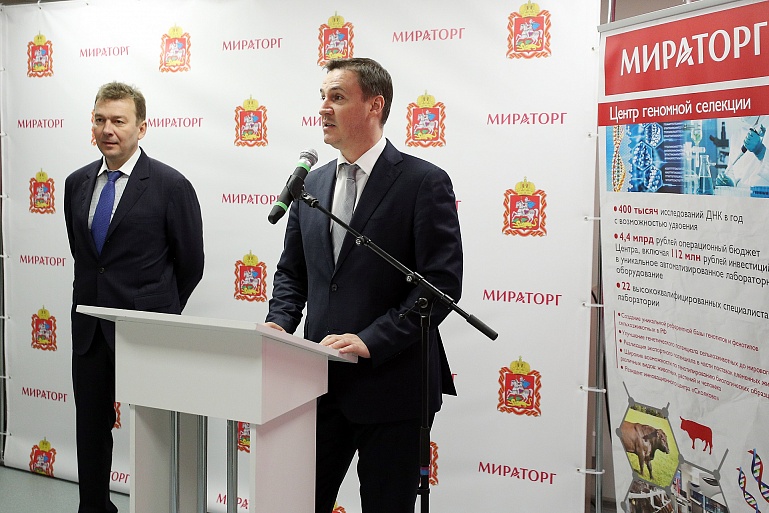 The operating budget of the Center is 4.4 billion roubles including 112 million roubles for unique automated laboratory equipment. The Center is the resident of Skolkovo Innovation Center and ranks among Top 5 global genetic veterinary laboratories. The most difficult tasks of livestock genomic evaluation and genotyping will be performed in the Center. Over 400,000 DNA tests per year and genotyping of biological samples of various species (animals, plants and humans) can be done there due to automated equipment and highly qualified specialists. One of the objectives of the Center is establishing a unique reference genetic basis.

Dmitry Patrushev inspected the production facilities and noted that improving the efficiency of livestock enterprises is very important for the country. He believes that the Center will be able to provide domestic breeders with genetic materials of high quality. Thus the import substitution of the industry will grow and the competitiveness of Russian livestock enterprises in world markets will increase.

One of the strategic tasks of both Russia and Miratorg is developing livestock selection and breeding programs and reducing dependence of genetic resources on import. ABH Miratorg has the largest Aberdeen Angus herd in Europe – over 580 thousand heads, and the Company’s breeding stock with high genetics is more than 350 thousand heads. Therefore Miratorg’s nucleus herd is the unique genetic base for genomic selection project which provides the possibility to predict the breeding value of an animal almost immediately after birth and to improve the gene pool of herds in respect of economically important traits.

“The development of the agribusiness complex has a great multiplier effect on the growth of related industries as well as stimulates the development of basic sciences such as biochemistry, genetics and molecular biology. Our project sets a new stage of basic science to make a breakthrough in the most complex branch of agriculture such as selection. The center will work not only for our company, but also conduct researches for a wide range of customers. As a result, domestic animal husbandry will be less dependent on imported genetic materials. We expect the breeding efficiency and breeding livestock export will be significantly increased in the medium term”, said Victor Linnik, President of ABH Miratorg.